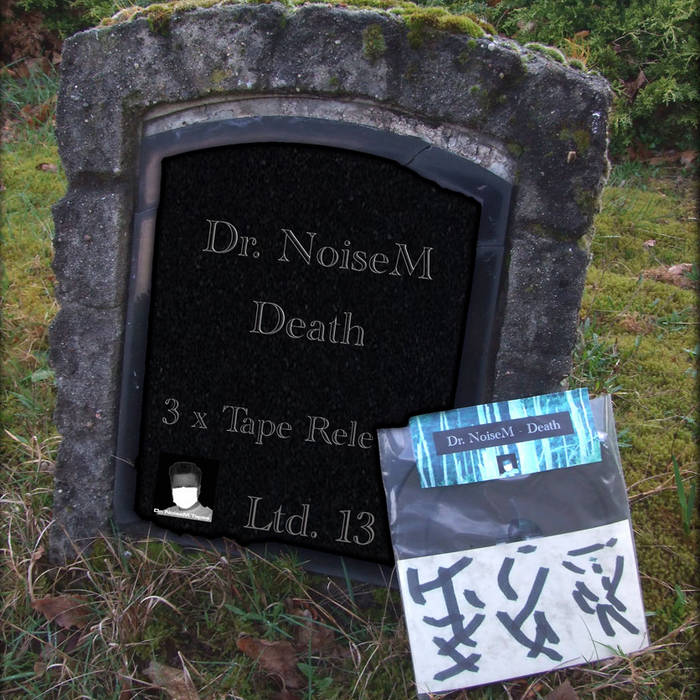 Whoever that mysterious Dr. NoiseM is - it's pretty obvious that this guy has a thing for a) epic, excess length releases and b) hyper limitations as his "Death" album is a) stretched over three 90 minute tapes and b) is limited to only thirteen, hand numbered copies world wide. Yes, 13 that is. With each side of each tape holding one single, 40+ minutes long piece that could be an album of its own this one changes the perception of the album format radically and - due to the limitation factor and its very special packaging - is crossing over into the fields of conceptual art. Starting with A1 we see an ever repeating three tone sine loop as main motif running alongside alien winds and various, droning Dark Ambient vibrations and wafting, melancholia-laden synth tones telling tales of seafarers yen, romanticism and minor-tuned wanderlust. Flipping the tape for A2 we find reclusion and alienation in their most perfect, audible form. Frosty winds and farthest machine movements, technical signals and lost audio warnings announcing motor activies that have fallen silent ages ago whilst a creeping manifestation of naught begins to form with an electrically buzzing induced power noise effect. One is literally able to feel dark powers in motion, evil nonentities floating due to extrasensual effects and brooding pestilence being born in parallel dimensions beyond our imagination, causing shadows to grow in frosty corners whilst dead apparatuses coming to live again in abandoned laboratories. With B3 - the first side of the second tape - the listener is greeted with an icy crackle varying in loudness, intensity and modulation soon accompanied by spooky, abrading metal tones coming from inside of a huge tank or chamber like the movements of an awakening, large unknown entity. Large, hollow spaces seem to be one of the main topics the artist seems to deal with here - spaces low but too wide to provide proper echoes but with an overall sonic atmosphere depicting their spatial dimensions. When it comes to B4 we're sucked into avery threatening, intense aural environment that can be described as Noize and Drone-layered reproduction depicting the aftermath of a deadly and contagious disease turning the global population into a sickening mess of walking dead. But around halfway through the Noize mutates into a more - still unresting and outlandish - variation of Death Ambient loaded with heaps of perturbing sounds and a generally alarming feel that's not made for the weak-heartened. Those loving their Drone and Death Ambient being deep and contemplative are recommended to listen closely to the opening sequence of C5 bringing on sacred, ritualistically floating sounds which are kind of comparable to classic works provided by artists like Tarkatak or Kallabris, celebrating the fascination of solitude and deep-felt dolor in their sparse but sprawled musical journeys. Throughout the runtime of approximately 40+ minutes Dr. NoiseM does not only serve this feel of isolation in perfection but also adds, starting around minute 25 or so, slow grinding robotic movements and sound like taken from a huge, gigantic respiratory protective device to his C5 track which results in a hard to bear one for those suffering from depressive disorders. Finally C6 takes the isolationist view on things even further, leaving the Drone aspect being stuck in the very background and fully focusing on the robotic tones familiar from the track before. After a while these are drawn into psychedelia driven spirals of decaying sounds from time to time, like those appearing in old time travelling-focused sci-fi flics when people jump from period of time to another - preferrably when they're beamed to cold, frosty and hostile regions, lifeless planets or abandoned spaceships. But after about two thirds of the tape even these noises fade out to silence, the illusion of a faraway female voice seems to be flashing through the speakers for a second or two and one cannot be sure if this was just psychoacoustic smoke and mirrors or reality as the final silence is too overwhelming to allow deeper thoughts on this question. What a journey.

Bandcamp Daily  your guide to the world of Bandcamp