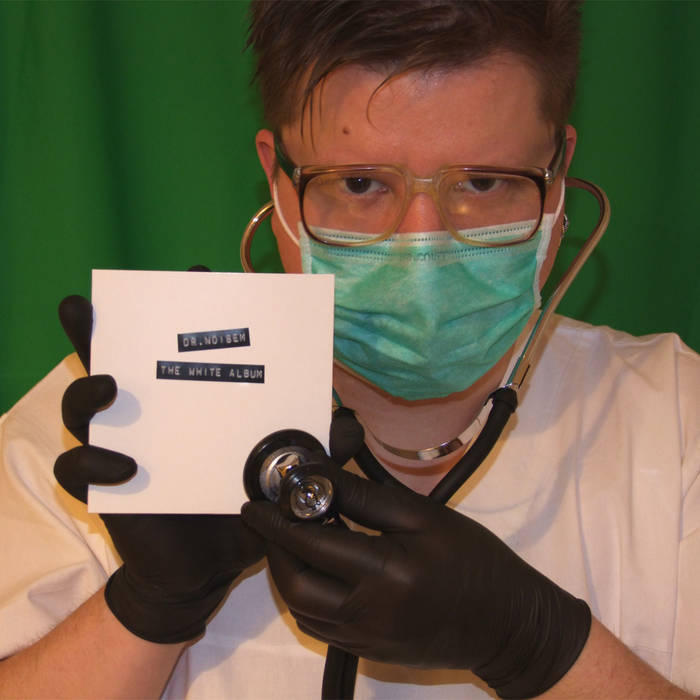 To call Dr. NoiseM's "The White Album" one of the most epic releases in experimental electronic music of 2014 would be - most honestly - not only a bit of understatement as this limited to 25 copies worldwide DVDr album with its three tracks sums up to a total running time of 6 - yes, indeed: six ! - hours which makes it nearly impossible to listen to it in one go at all in these days so hectic.
That's why it took quite a bit to fully review this one starting off with the slightly pulsating, ever changing "Untitled A" which gives way to a kind of acidic, alien swamp-feel from the very start and presenting itself as a sonic equivalent to what's called analogue temporal expansion of a video signal in visual art which, around minute 20 or so, slowly starts to transform with appearing layers of soughing sirens built from hollow, nerve grinding static Noize abruptly falling into scrambled pieces of irritating Noize after another twenty minutes of total time. Throughout further progress of the first 120 minutes one will find himself stuck in seriously warped sonic areas of viscous, gooey slo-mo tones, pulsing Drone machinery contrasted by crystal clear sparkles of laser'esque precision, wobbly alien braindances to be found around minute 67 followed by tense, spiralling and well alienating sonic transmission underpinned by skeletal rhythm stuctures, disruptive Noize bursts and more outerworldy signals captured and reproduced in Dr. NoiseM's studio.
With "Untitled B" we start into another 120 minutes journey that's introduced by demure, softly plinkering noises that are truely evoking the sound of tiny alien bells appearing on top of steadily buzzing, swamp-reminiscent sounds produced by small life forms, possibly of martian origin. These later are contrasted by carefully executed extraterrestrial laser harp tones teaming up with pulsing Noise eruptions around minute 20 to form a deep Space Ambient orchestra for highly advanced dancefloors grooving along to swelling strings for nearly 40 more minutes before the next transition starts, the buzz and hissing sounds get more intense and plangent strings set a new tone and color, clearly depicting long time loneliness and intense, heartfelt despair on top of a still grinding foundation. Suddenly the beat comes to a halt at minute 75 and leaves us alone in a post nuclear wasteland of static Noize and random sirens that provide nothing but isolation and intrinsic rot. But finally even these sirens die and all that's left is electrostatic discharge and growling winds, both providing the only audible noise in a wasted world left behind on an abandoned planet with an even more depressing future to come although the alien bells keep ringing occasionally, breaking the silence after 117 minutes of sound transmission.
Finally "Untitled C" deals with vast echoes of unknown, slow moving machinery clanging in factory floors way beyond huge, accompanied by droning ebbs and flows and abstract communication streams of artificial origin, disconnected by intense warning signals appearing around minute 13 - the perfect opening score for a deep space sci-fi flic as one can literally feel the tension and threat of things waiting beyond the spacecrafts exterior shell. But no matter how long the alarm proceeds or what kind of soothingly tripping, more Ambient-like melodies do appear along the way, there's no relief but just more tension and conundrum as the alarming pulse starts to disintegrate and crumbling away in a kind of illogical pattern before fully breaking off into a whirling, tilting maelstrom of high tech tones. More tilt appears when the maelstrom turns into a grinding Noize tornado of swelling intensity at minute 48 that wipes every single braincell out due to its bevelling nature and, of course, the alienating, irritating tinkle of these tiny creatures that already appeared in the previous two hours. Their sound mutates into swelling bass drones and weird interruptions after minute 70 has passed and comes back as a transmutation that sounds like tuning in to some weird long wave radio channel at the unused end of the spectrum where more Noize mayhem is to be found at some point before the next sound transformation ends up in kind of electrified, ever humming digeridoo transmission.

Musically recommended for sure, mostly to those who've got a lot of spare time to spent listening to such a massive piece of work in one go or in a kind of exhibition'esque context.

Bandcamp Daily  your guide to the world of Bandcamp